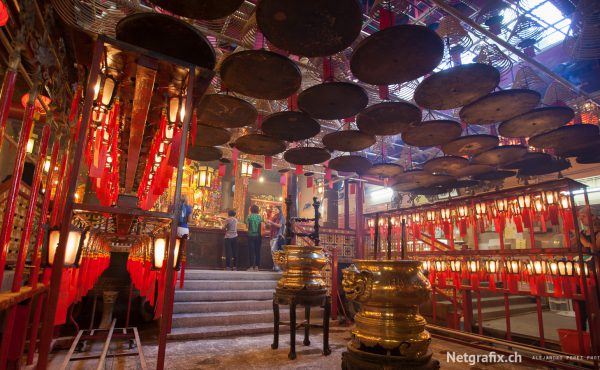 I got to visit for the first time a temple in Asia. This one is located between large buildings and I would certainly recommend to anyone interested in visiting a temple in Hong Kong. It’s full of incense smoke in a quiet and welcoming atmosphere. Photographers are welcome, just do not forget to contribute with 2 Hong Kong Dollars 🙂

The Man Mo Temple in Hong Kong is located at Nos. 124-126 Hollywood Road, in Sheung Wan. It was built in 1847. It is part of a complex that comprises three adjacent blocks namely Man Mo Temple, Lit Shing Temple (No. 128 Hollywood Road) and Kung So. The Man Mo Temple, the main building of the complex, is dedicated to the civil god Man Cheong and the martial god Kwan Tai. Lit Shing Kung (列聖宫) is for the worship of all heavenly gods. Kung So (公所), to its west, was an assembly hall where community affairs and disputes were settled. In 1908, the Temple was officially entrusted to Tung Wah Board of Directors.The temple has since been managed by the Tung Wah Group of Hospitals. It was graded as a Grade I historic building in 1993 and it is now a declared monument. (Source: Wikipedia)